“Sales of books, in both print and digital formats, are struggling around the world, despite the efforts to promote reading on World Book Day. However there is one area that’s bucking the trend: Audio books.

World Book Day is promoted (sic) a worldwide celebration of books intended to encourage reading, but revenue from book publishing is falling worldwide.

Statistics from Euromonitor released in 2015 show that turnover from book publishing has experienced sharp declines in recent years. Between 2011 and 2014, revenue fell from $165 billion to $145 billion. The harshest decline was 2011-12, when the global book market contracted 7.4 percent

Part of the reason for declines in print book sales was the rise of e-books and e-readers, but this sector is now falling. According to business magazine “The Bookseller”, e-book sales by the U.K.’s five biggest publishers dropped 2.4 percent between 2014 and 2015, to 47.8 million.”

Well, this sucks for those of us who want to sell our published works.

So why are print sales falling?

The question  is then, why are audiobooks sales going up? We should be happy that people are still consuming literature, even if they listen in, right?

Overall, if I have a story to tell, I don’t really care how they engage in it, as long as they do. And as long as I get paid. Speaking of, I’ve gotten 1500 Wattpad reads in 4 days and a lot of new fans. And of course I get zilch. But this book has been plowing through the 5-digit reads so it’s a good sign for me that this book will sell well when published. The question is, will a traditional publisher want this? Or will I end up self-publishing?

Below is my first attempt to vlog, or video blog. Basically typing hurts my fingers so I decided you’d care more if I talked into a webcam  rather than read anything I write. Oh, well, either way no one cares.

The topic: ‘The Fault in Our Stars’ and the PR opportunity with the movie which could have given the movie, and the topic of a teenage cancer romance story, more of a bump than it did. Watch the video below:

COMING UP NEXT: A lot of people who write like to talk about writing novels. But telling a story and writing a novel are not completely mutually exclusive. I’ll provide some ideas to keep in mind when telling stories (hint: think of how you might compose your body when you talk)

COMING UP SOON: I’ll continue the lesson on story-telling but I’ll talk more about the body’s gestures, like hand gestures, body language, etc.

I came across this graph at the blog fuckyeahscifiwomenofcolour.tumblr.com/. The original website it comes from is from Lee and Low’s blogsite Read it and think about it: 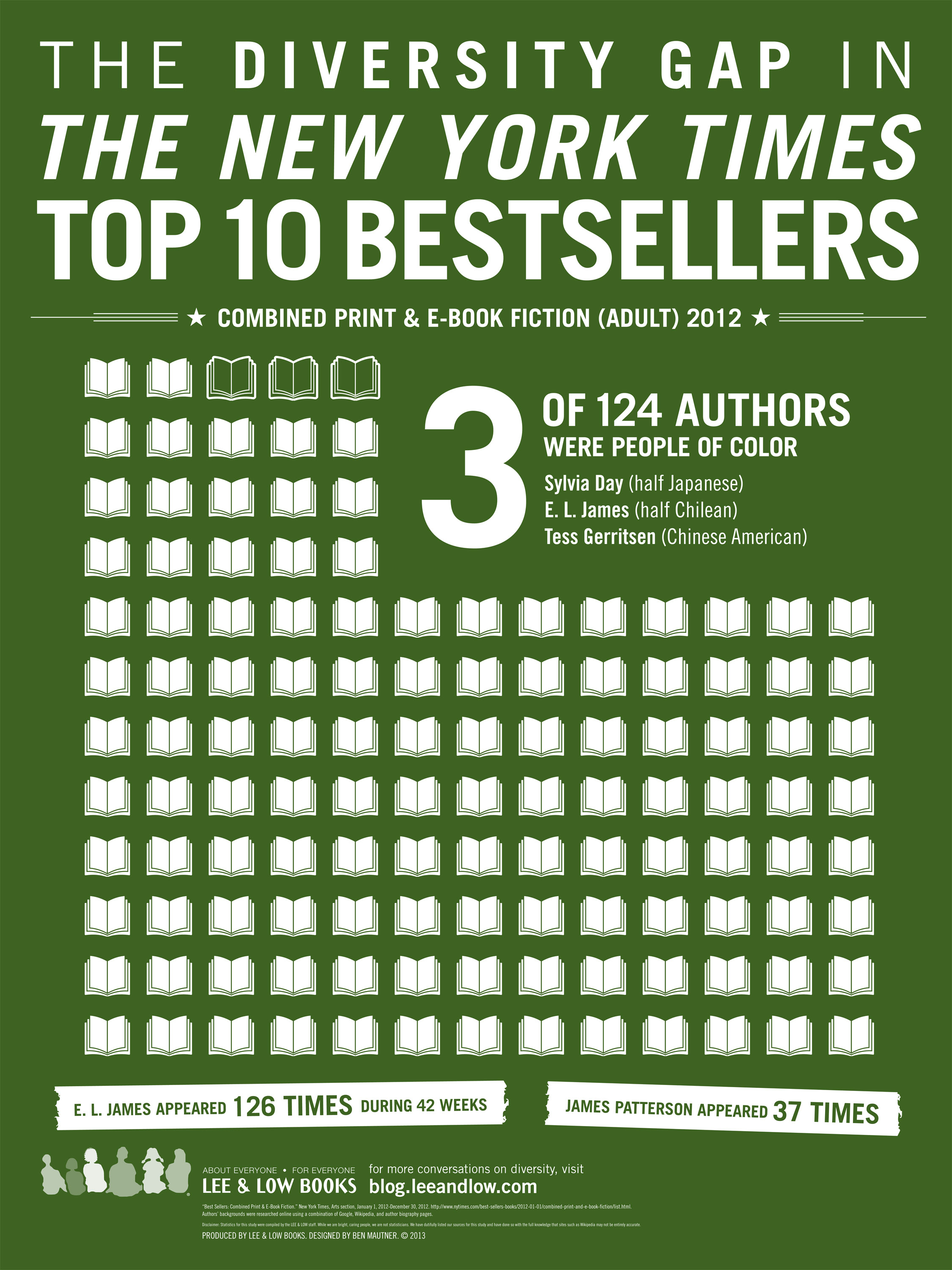 If you are a minority/person of color and you have aspired to becoming a writer (yours truly speaks in the first person on this one) you may look at this and become convinced that the odds of becoming a bestselling author are slim, or if you are writing a book with a lot of minority characters (includes LGBTQ) in it your novel will not sell. While I am not sure what Lee and Low think the primary cause of the dearth of non-heretosexual Caucasian authors and characters are, I can offer my best guesses for a few of these items (warning: my opinions on most matters are well-informed and based on my expertise and/or knowledge of a subject. If facts bother you, this is not the blogsite for you!):

First off I am surprised only 14% of movies have a female protagonist. They may be referring to movies like Lucy or The Hunger Games where the primary protagonist is female. The lack of villains of color (assuming Darth Vader doesn’t count) is likely due to the fact that Caucasians dominate Hollywood and there is fear that if they make the “bad guy/girl” a minority they will be charged with racism, so it’s safer just to make the villain Caucasian.

As for the books, the first truth is well-read and well-educated people tend to become authors. Well, the sad reality is that many Black and Hispanic children are behind White and Asian peers when it comes to reading and writing. In some states, like Delaware where I live, the difference can be as much as two full grade levels difference (i.e. White child in 6th grade reads like a 6th grader should, Black or Hispanic child are at 4th grade level). Children who don’t grow up around books and who can read them are less likely to want to write them someday.

The other truth is income-based; Many low-income children grow up in a single-parent household, and often that single parent does not read to the children on a regular basis the way parents with higher incomes or education read to their kids. Since reading has long been seen as something predominately solid middle, upper-middle, and upper-classes do, and most Americans in those categories are White, then it’s logical most authors will come from households where reading was encouraged over home where it is not.

It’s also therefore logical that the vast majority of those whose jobs depends on writing of some kind, including agents, publishers, editors, book reviewers, screenwriters, movie producers, directors, etc., come from the same backgrounds. Don’t believe me? Go look for an agent or publisher and tell me what seems to stand out. If indeed the facts mentioned above are in any way related to the types of books published and movies made, then you cannot expect movies and books which are “different” to become blockbusters without a major change in the movie making and literature world.

The most logical reason then for the lack of POC in books/movies has more to do with who writes and who publishes vs. inherent racism and discrimination against authors of color, but it would be wrong to say there is no prejudice whatsoever anywhere in Hollywood and in literature.  Accept that if you are of Hispanic descent (yours truly) or some other non-White background you will feel as though the already-challenging odds of getting published are even harder, especially if you happen to write about a theme which is “different” than what usually fills the bestseller lists or makes blockbuster franchises. It may seem unfair but it is the cold, hard truth.

There is, however, hope for you.

The best advice I can give is never to quit writing or producing movie content. If you do then you simply create a self-fulfilling prophecy. Write the book or movie script YOU want, not what someone tells you is “acceptable” for publication or production. What should matter is the quality of the story and not whether some major publisher or distributor deems it among the “chosen ones” based on pre-determined criteria and/or whether YOU THE AUTHOR are among the “approved ones” based on your age or what you look like.

One suggestion is to examine your own personal life or the life of someone close to you and look for something unusual or which stands out from the experiences you would expect the average American has.

For example, if you were ever involved in gang activity, but now you are out of it, that’s a good story right there. You can write a story about gangs better than someone who was never in a gang or who didn’t know gang-members personally. If you were in the military in any country, write a fictional story based on your experience, whether or not it is a military novel. In my case I infused elements of my Boy Scout camping days in the novel I am currently editing. If you were born poor or homeless or on a tribal reservation, create a story based on how you lived and how you felt. There’s an old saying “people write what they known” and it’s true. Use your unique life experiences to your advantage in your writing!

COMING UP NEXT: novels for male audiences. Do guys even read books anymore? Or is the future of fiction going to belong to the “chick-lit” genre which basically means romance novels (paranormal or normal doesn’t matter) or dystopian thrillers with female heroines? Stay tuned.

COMING UP SOON: will also post some vlogs on some topics I care about and repost them here. For this upcoming episode I have a couple things to say about “The Fault in Our Stars” and its author John Green. Some flattering, some less so. Stay tuned.

He Said, She Said Games

Board game reviews from both perspectives

...one writing step at a time

"The World is round and the place which may seem like the end may also be the beginning."-Ivy Baker Priest

Be careful, or you might land up in my book.

Board Gaming For the Win

Monthly Festival : Turn your book into a movie and get it seen by 1000s of people. Or garner FULL FEEDBACK from publishers on your novel and help your next draft. Or get a transcript video of your novel performed by professional actors.

Musings and books from a grunty overthinker

The Road to Being a Published Writer

Adventures in writing and publishing on the web

It's time to get hella serious about writing!

Welcome to my book world!

4 out of 5 read-ologists recommend this WordPress.com site. ups and downs of writer's insanity and day to day life. I will write whatever makes the voices happy, for a writer that ignores her inner voices is merely a mental breakdown waiting to happen. Keeping the voices happy and creating new worlds for them to play in is my main goal.

If you need help on writing, I'm here.

A love story based on real life events!

The Book Reviews You Can Trust!